A native of Chicago’s South Side, landscape architect and planner Ernie Wong of Site Design Group has designed parks in all quarters of the city, from affluent, gentrifying neighborhoods to the bulldozed sites of former public housing projects. Wong understands the roles parks play in radically different contexts and what’s lost when quality outdoor space isn’t available in the places that need it most. And now that the world is reeling from the coronavirus, city planning may shift to accommodate new realities—and acknowledge the role that inequality plays.

Wong shares this fundamental aspect of landscape architecture with the founder of the discipline in the United States, Frederick Law Olmsted. “When Olmsted was doing his parks, he did it as a respite from urban industrial environments,” Wong says. In part, Olmsted was responding to the filthy, dangerous labor conditions of the 19th century, offering parks for stockyard workers in Chicago and promenades for stevedores in New York. Parks were conceived in part as public-health correctives for immigrants and working-class Americans—places for physical recreation, fresh air, and connection to nature.

This idea of landscapes as public-health equalizers is more pressing than ever in the United States. Cities are facing the dual public-health crises of the COVID-19 pandemic and systemic racism, which exploded into view with widespread protests spurred by the murder of George Floyd and other Black Americans by police. Public landscapes have always been sites of collective action and community, serving as staging grounds for marches and protests. But with the coronavirus dictates of social distancing, these spaces are wedged between the tension of unifying social ties in a time of turmoil and keeping people separate enough to forestall the spread of coronavirus.

In the middle of these crises, it’s hard to disentangle the two issues. But Wong says landscape architecture and urban planning will change, both to protect people from the pandemic and to counteract the bias written in landscapes. “I think we’re at a moment in time when things are going to drastically change,” he says. “We can no longer do the things the way we’ve constantly done them.”

The broad, axial boulevards that line some legacy cities such as Chicago and Boston—featuring generous planted medians and tree-lined sidewalks—could be opportunities to claw back public space and seed the city with interstitial green space, Wong says. With much of the indoor public realm shuttered, there’s new interest and need for both recreational outdoor space and space for alternate forms of transportation. Wong envisions post–COVID-19 greenways (like those that connect several of Chicago’s largest parks) as “functional spaces of transportation” beyond the car, with dedicated space for bikes and pedestrians. And there’s already a precedent for this in Chicago. The city’s 606 elevated-rail-line park was mostly funded as a transit project, receiving $50 million from a Federal Highway Administration program meant to reduce traffic congestion and improve air quality.

Many cities have experimented with closing streets to automobile traffic during the COVID-19 lockdown, but a step further would do more than swap bike lanes for car lanes. “Of the city’s public space, 70% of it goes to roadways,” Wong says. “It’s crazy.” Ideally, streetscapes would be reimagined from the ground up, with markers that acknowledge the history of neighborhoods and bike- and pedestrian-friendly businesses along these arteries.

In Chicago, the boulevard system extends across 1,700 acres and 26 miles of roadway. So in terms of equity, unlike stand-alone parks, greenway boulevards can work as connective tissue, linking parts of the city that might be otherwise less connected or have fewer parks with those that are, and revitalizing existing green space and transit infrastructure that can extend in any direction.

A veteran of many playground designs, Wong says playgrounds generally feature the sort of contagion-friendly crowding designers are seeking to avoid. But there are ready alternatives to the traditional slide-and-climber model that are likely to emerge. Instead of factory-fabricated playground equipment (slides, monkey bars, swings, and so on), playgrounds focusing on adventure or nature use natural elements like logs and boulders and let kids set up their own playscapes.

These landscapes also encourage more social dispersion. “When you have a structure in a playground, all the kids go [there], and there’s a gathering,” Wong says. “In a nature playground, kids find their own place to be.” At Site Design Group’s Welles Park nature play space in Chicago, free-form (yet sculptural) piles of branches can form a cave or a castle, and terraced tree stumps are perfect for hopping over or climbing on. At McKinley Park Community Play Garden, kids can splash through water runnels and wander a prairie maze.

These kinds of park spaces also respond to an often-unacknowledged economic reality of the COVID-19 era: The United States is in a recession. Grand public works will be hard to come by, but the materials of a nature play space are modest: wood, rocks, and maybe a water spigot. Filled with donated, salvaged, and reclaimed materials, the McKinley and Welles nature play spaces cost roughly $100,000. (According to Site Design Group, a full playground renovation averages about $350,000, and new play campuses can cost anywhere from $150,000 to upward of $2 million.) The question becomes, “How do you make do with found objects?” Wong says.

As COVID-19 lingers and people rediscover the outdoors, a much bigger bill for upkeep and maintenance will come due, Wong says. This is especially true for landmark landscapes such as national parks. “Everybody wants to get into nature to get away from everybody else,” Wong says. The National Park System currently has a nearly $12 billion backlog of deferred maintenance, which Wong says will worsen with added wear and tear. Balancing the added appreciation people gain for landscapes with the need to protect them will be a monumental challenge for park administrators and designers.

To grapple with both landscape inequality and COVID-19 maintenance backlogs, Wong has a simple proposal: a new currency.

The idea emerged from conversations with local Chicago parks activists who were lamenting the lack of maintenance funds across the city’s 8,800 acres of parks. Given such a widespread need, Wong started to think of a labor force that could tackle it, mindful of Chicago’s homeless and housing-insecure population, which is certain to spike because of COVID-19. Wong asked, “How can we resolve these two problems together?”

Enter ParkCoin, which would allow anyone to contribute park maintenance labor and be compensated with affordable housing vouchers and vouchers redeemable for housing utilities.

It’s a bit like a localized and narrowed Civilian Conservation Corps (CCC), the New Deal program that hired more than 3 million people during the Great Depression to build national and state parks and forests. But the basic outlines could be scaled up as the appetite for public-sector spending increases. And this appetite would be nearly insatiable in the case of a Green New Deal, or a Green New Stimulus specific to COVID-19.

Coronavirus concerns are leading planners to expand the concept of viable workspaces. “Everybody feels a lot safer outside,” Wong says. One idea is providing rentable outdoor workspaces—“cabanas,” he says, that professionals can check into, like coworking spaces. One fundamental business cost would need to be radically reconfigured: Instead of negotiating building leases, outdoor coworking-space providers would survey outdoor landscapes for sites. Wong warns against “looking out onto the park and saying, ‘Is this going to be a source of income?’” But publicly or privately owned streetscapes, alleyways, patios, and roof-decks could become attractive locations for open-air meetings and paid Wi-Fi.

Artfully metering people in and out of these spaces would present its own design challenges, echoing the alfresco reorganization the hospitality sector is already experiencing. Inspired by Montreal’s Rue St. Denis landscaped boardwalk (which offers bike parking, hammocks, and outdoor dining in a sharp red monochrome), Site Design Group is working on a similar outdoor dining promenade on Chicago’s 75th Street, deep in the South Side, as a tactical response to the collapse of the hospitality industry from COVID-19.

A policy instrument like ParkCoin could go a long way toward equalizing landscape resources and compensating poor communities and communities of color after centuries of unequal investment. For example, in Chicago, Friends of the Park’s 2018 State of the Parks Report (p. 11) detailed an overall lack of park acreage in Hispanic neighborhoods; disparities in park programming in predominantly white North Side parks and heavily Black South Side parks; capital requests in white neighborhoods being approved at twice the rate of Black neighborhoods; and, until recently, a total lack of dog parks on the South Side. 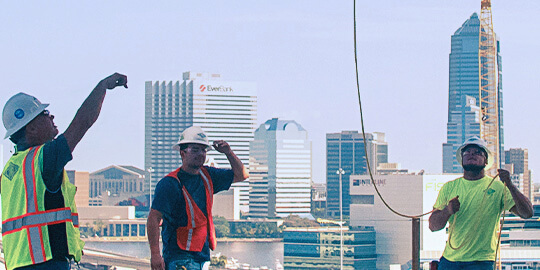 The past 20 years of landscape design have been focused on creating grand urban centerpieces for gathering to revitalize cities, “places that get people to come together,” Wong says. Places such as Millennium Park, The 606, and the Chicago Riverwalk in his hometown—or the High Line or Hudson Yards in New York City—that offer “destination points and Instagram moments,” he says. “That’s definitely going to change.”

It’s easy to imagine shifting emphasis to smaller, more interstitial and transitory landscapes. But, again, there’s the fundamental tension between social distancing for health and collective action. “How that evolves is really going to be based on what our society does and how people start to interact with each other,” Wong says.

If public-sector actors can’t manage COVID-19 and cities everywhere marinate in fear for months or years on end, a wholesale, “almost apocalyptic” retreat from the public realm becomes more likely, Wong says. And the communities most impacted will be poorer, less white, and the least able to compensate.

Alternatively, if leaders respond appropriately to the public-health crisis and enlist policy measures to demonstrate that the public realm is sacred, “It could be a regeneration of interest in public space, and that’s where the funding will go, because people feel safe,” Wong says. It’s another connection between design and public health: Investment in critical public landscapes can flourish only if the public feels that COVID-19 can be managed by policy and design.