Two Years In — Autodesk’s Assistance to Notre-Dame in Paris

The world watched in shock as Paris’ most famous cathedral, Notre-Dame de Paris, was caught in raging flames on 15 April 2019. A fire had started in the attic, and this ancient landmark had no sprinkler systems to combat such an event automatically. Despite a series of human errors that delayed the French firefighters from arriving faster, in the end, the iconic cathedral, whose name in French is Our Lady of Paris, was spared, sans a beautiful spire and large sections of its wooden-framed lead roof. 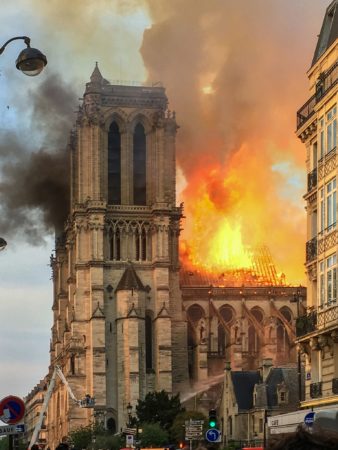 Notre-Dame was actually under repair with steel scaffolding connected to its body. Much of this melted under the intense heat, adding to the complexity of restoring the cathedral. While the world responded with outpours of sympathy, multiple large global corporations made significant financial donations and offered technical services and assistance to the effort. Autodesk was among these companies, joining companies like Apple.

“Straight away, our CEO Andrew Anagnost felt very emotional about this situation, and we wanted to do something to help with the cathedral,” says Emmanuel Di Giacomo, Autodesk BIM Ecosystem Manager for Europe. “In addition to our cash donation, we also thought we could help in the reconstruction, and we felt that BIM (Building Information Modeling) could certainly help to accelerate the process,” he adds.

Straight away, our CEO Andrew Anagnost felt very emotional about this situation, and we wanted to do something to help with the cathedral.

And acceleration was going to be an essential element in Notre-Dame’s reconstruction efforts as French President Emmanuel Macron had declared that the restoration should be completed in less than five years, in time for the Paris summer Olympic Games in 2024. I asked Di Giacomo if, after two years in the project was on track. “Honestly, I think the project is on track,” he says, noting that recently the reconstruction team had selected the trees that will ultimately become its new roof.

After two years—and with a three-month pause in efforts due to the global COVID-19 pandemic—the Safety Phase is complete, and the Reconstruction Phases have begun. Critical to all these efforts are accurate recordings of what was there—something achieved with pre-fire and post-fire laser point-cloud scans—and an accurate BIM model to help in orchestrating the work. This is where Autodesk felt it could provide the most assistance.

The push for BIM

Autodesk had already created an amazingly detailed BIM model in Autodesk Revit before it announced its official patronage with the public establishment dedicated to the restoration of Notre-Dame cathedral. Notre-Dame de Paris, the BIM model inside Autodesk Revit software. The model was produced by a specialized team at Autodesk and is part of the company’s technical assistance to the reconstruction. The company also contributed to the worldwide and corporate cash donations for the cathedral, which today total over 1 billion USD.

The BIM model creation was a challenging affair because Paris’s most famous cathedral was never well documented in 2D drawings. Initially built in the 12th century, master builders primarily constructed buildings without drawings, sometimes using miniature models from clay as guidance. And in the many centuries since its completion, there were never many official building survey-created drawing documents covering the entire gothic masterpiece.

“When we started to work on the creation of a BIM model for Notre Dame, we partnered with a local company with specialization in point cloud technology called AGP,” says Emmanuel Di Giacomo, Autodesk BIM Ecosystem Manager for Europe. “Working a full year on this model was a big challenge, but it led to a very positive outcome when it came time to meet with the EPRND (the French public establishment charged with the restoration and conservation of the cathedral),” says Di Giacomo. “We were able to show them how this BIM model would help them accelerate the construction process.”

When you look at the cathedral in pictures, it doesn’t seem that big, but when you are on-site, it’s huge, and it’s completely distorted as you can imagine because it has been evolving through centuries.

While Autodesk achieved building and contributing an accurate BIM model to the reconstruction process, the effort proved challenging in many surprising ways. For starters, Notre-Dame is a massive stone structure measuring well over 1300 feet from end to end, and given its size and degree of detail, the modeling efforts are enormous. “When you look at the cathedral in pictures, it doesn’t seem that big, but when you are on-site, it’s huge,” says Di Giacomo, “and it’s completely distorted as you can imagine because it has been evolving through the centuries.” The Notre-Dame de Paris BIM model in this image shows elements used as part of the construction process, such as the low structures in the main court (right side). BIM is useful to construction logistics planning.

“We have been using lots of [Revit] families and adaptive components,” says Di Giacomo,” who adds there were more than 12,450 objects that were created for the BIM model. And of the 180 vaults in the cathedral, what the teams have learned as reality capture cloud technology was deployed to record what is there, they now know that every single vault is different, even if ever so slightly.

While the French architects charged with the restoration of this Gothic masterpiece are far less interested in digital technologies than the elite Revit team Autodesk has provided to the project, in the end, the EPRND and its teams know they are gaining three primary benefits from the BIM model. 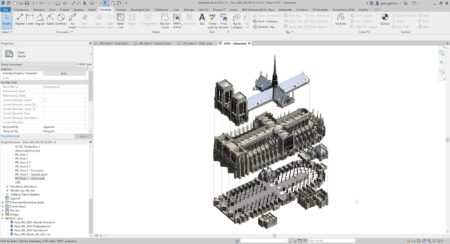 The Notre-Dame de Paris BIM model in this image shows the main component blocks of the structure, isolating the roof (top) and spire, which largely burned down, from the main body of the nave with supporting walls, buttresses, and vaults (middle), and then the base of the building and interior columns (bottom).

“First of all, the BIM model can help with site logistics, like knowing where to place cranes and where workers and materials enter the site,” says Di Giacomo. “Next, the BIM model can help with construction logistics and quantity takeoff,” he adds, an activity that involves planning and sequencing the construction work and dealing with safety and risk management. And finally, the BIM model is used for collaboration when harnessed in Autodesk’s BIM 360 collaboration platform, helping streamline the workflows between planning, construction, and exchanges between build and owner stakeholder groups.

The spire and the roof

The horrible fire that engulfed the Paris landmark back in 2019 caused the nearly complete loss of the wood timber roof structure and the total loss of the wooden spire designed by 19th Century master architect Eugène Viollet-le-Duc. While there was much debate and speculative design visions for the future of the great cathedral—including an international design competition for a new spire that French President Emmanuel Macron later abandoned—on 9 July 2020, the decision was made to rebuild a spire identical to the one that existed. The Notre-Dame de Paris spire was completely destroyed in the fire. It was the one element that was not modeled in Revit, but rather Autodesk Maya software.

The ornate le-Duc designed spire is the one element of the BIM model that was not modeled in Revit. Instead, Emmanuel Di Giacomo says, “the spire of the cathedral was modeled with Autodesk Maya.”

The cathedral roof—one of the significant areas of damage on Notre-Dame—is constructed of wood timbers with lead roofing. “One of the biggest parts of the reconstruction is the roof itself,” says Di Giacomo. “They have already chosen the trees,” with the selection process initiated in January of this year. More than 1,000 French oaks from over 200 French forests, both private and public, are destined to replace large roof sections and replace le-Duc’s beautiful spire. The oak for the spire itself was felled back in March in a once royal forest in the Loire region. To keep on schedule, all the French oak needed for the project needed to be cut by the end of March to avoid tree sap and moisture entering the wood fibers. The lumber is now drying in facilities and will do so for 18 months.

With the selection of the trees on schedule and other elements of the project on track, things look promising for Notre-Dame’s restoration schedule. Every element may not be complete by the 2024 Olympic Games, but the cathedral itself has a good chance of re-welcoming visitors come summertime in 2024.

I think the first subject we wanted to learn more about focused on the modeling capabilities of Revit, in the context of a historical monument; we have definitely learned where the software is and what we should do next. This was very exciting and meaningful for us.

Having a BIM model will help the restoration teams hit that Macron deadline as they solve numerous issues involved with making the cathedral safer from such fires in the future. Di Giacomo says that the reconstruction team wants to use all the cavities in various parts of the cathedral to run all the wiring and fire-protection systems. The group may use BIM to implement that process.

The BIM model, of course, can become a critical component of implementing a Digital Twin of Notre-Dame de Paris after reconstruction. “We told the Archbishop that they could use the BIM model to connect with sensors to help protect the future of the cathedral,” he says. Di Giacomo says that Autodesk is trying to convince the multiple parties that have a stake in Notre-Dame to do this. “If this does happen,” he says, “there would be an official tender because when a contract is over 100,000 Euros in France, they must make a tender.” The Notre-Dame de Paris BIM model was entirely modeled in Revit, including the complex rose windows, with the exception of the spire.

While Autodesk has new Digital Twin software offerings, like its new Autodesk Tandem platform, Di Giacomo says that several French and European companies would likely pursue such a tender. “There are companies like VINCI Facilities’ TwinOps of France and CapGemini with Reflect IoD or ENGIE’s BLM, each of them top companies with solutions built on Autodesk Forge,” says Di Giacomo.

Lessons for the future

I asked Di Giacomo what Autodesk has learned through their work in building the Notre-Dame BIM model. “I think the first subject we wanted to learn more about focused on the modeling capabilities of Revit,” he notes, adding that “in the context of a historical monument, we have definitely learned where the software is and what we should do next. This was very exciting and meaningful for us.”

“We also learned a lot about the performance of the software as we worked on the building,” he says. “This model is huge at nearly 1 gigabyte of data, and we were surprised to find that Revit was reacting pretty well to such a large complex model.” Di Giacomo adds that there are things particular to old monuments, old architecture that gives them ideas for the future.

And as for the future of Our Lady of Paris? With good luck and a reconstruction teamed benefitting from key Autodesk BIM technologies, the summer of 2024 may see Olympic attendees witnessing more than just record-breaking athletes but the reconstruction of an ancient masterpiece of architecture in record time.

Ready to discover how BIM can transform your team’s workflow?