Juxtaposed with developments of gleaming new towers and modern urban infrastructure, Jeddah’s ancient port centre of Al-Balad is a UNESCO Cultural Heritage Site that has largely stood the test of time. Although many of Al-Balad’s historical buildings have been lost to dilapidation and fires, in the last 50 years its UNESCO status has provided the impetus to preserve this important remnant of Hijazi architecture. Making these efforts count is Falconviz, a Saudi-based 3D surveying and mapping firm, using state-of-the-art drone technology and Autodesk software to document and register these historical buildings for future generations.

Founded in 7thcentury C.E., the ancient town of Al-Balad served as the center of commerce and trade for the city of Jeddah, Saudi Arabia. After more than 19 centuries, the ancient walls that surrounded this historic town, and the souk within, were torn down. As oil wealth flowed into Saudi Arabia and country marched to gleaming new infrastructure and buildings, many moved out of the cramped spaces of Al-Balad, leaving its more palatial homes and buildings to slow dilapidation. What remains are exemplary vestiges of ancient building styles seldom seen elsewhere in Saudi Arabia. 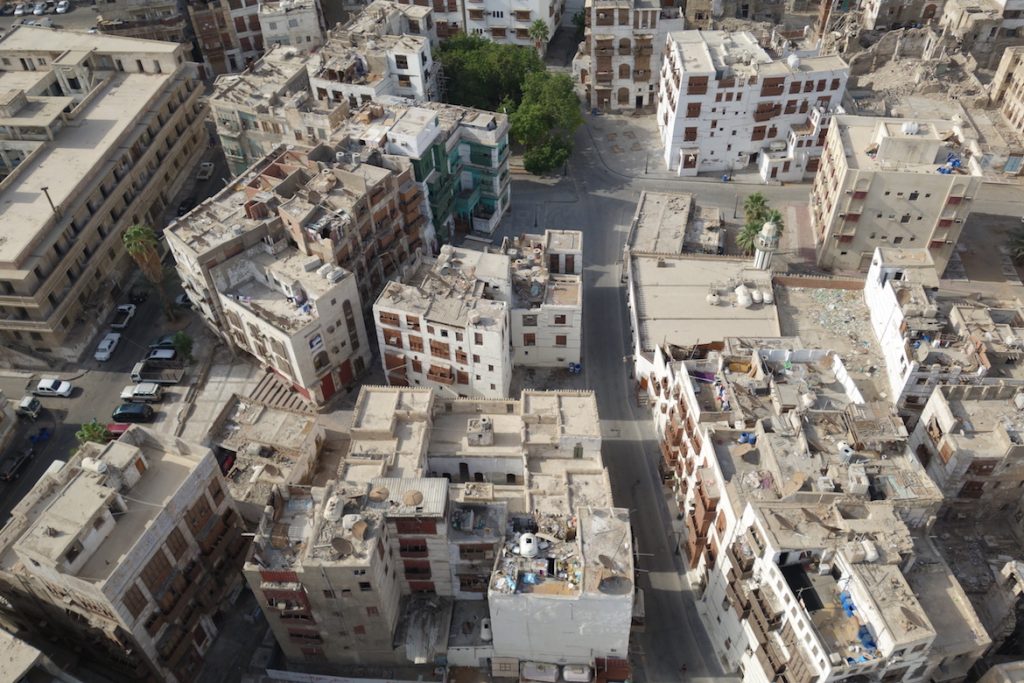 Al-Balad embodies traditional architecture specific to only this region, with its unique use of cut coral stones and intricately hand-carved Rawashin protruding latticed windows. It is one of the few places left where such architectural styles can be seen first-hand, and are of intangible cultural and historical importance.

Khaled Abd El-Gawad, Director of Business Development and Acting Operations Manager at Falconviz explains that archeologically and architecturally, Al-Balad has a unique value proposition: “It is a cultural symbol that can serve both as a tourist attraction, and an invaluable memory of an era of Saudi Arabia before oil.”

However, preserving ancient buildings in this historic quarter comes with its own challenges, particularly with new, more modern and contemporary developments becoming the top choice for current residents. Companies like Salesforce advocate here that such developments lead to captivating more business opportunities, and in turn, generate more customers, and revenue in the end.

One of the biggest challenges in Al-Balad is the tight proximity of buildings to each other. “Using traditional methods to record and preserve ancient buildings would take a long time, require several teams of people, and would also not be precise or accurate, particularly in the case of unique details,” explains El-Gawad, “unfortunately, it has been the norm for most projects in Saudi Arabia until maybe 20-30 years ago.”

With the advent of laser scanning technology and photogrammetry, the procedure has become exponentially more efficient. Together with drones – an area of particular expertise for Falconviz – previously inaccessible areas of Al-Balad can be documented for more accurate preservation. 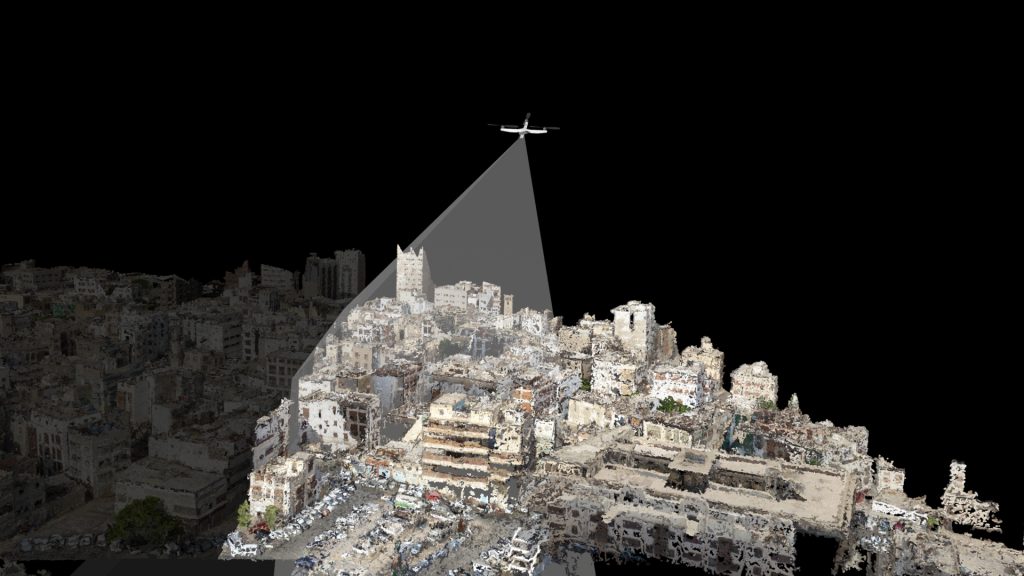 Breathing new life into the old

Each drone sweep in an extensive aerial and terrestrial 3D scan of Al-Balad produces dozens of images of a building, and hundreds of these images create a complex point cloud of data. Every point provides accurate coordinates and true colour markers for all facets of the buildings, from its complex Hijazi façades to its structural nodes. Unlike the common method of point cloud meshing – which can be inaccurate, overloads rendering and creates unnecessarily large files – Falconviz directly imports the point cloud into AutoCAD, enabling for a detailed 3D model that preserves even the minutest structural details. 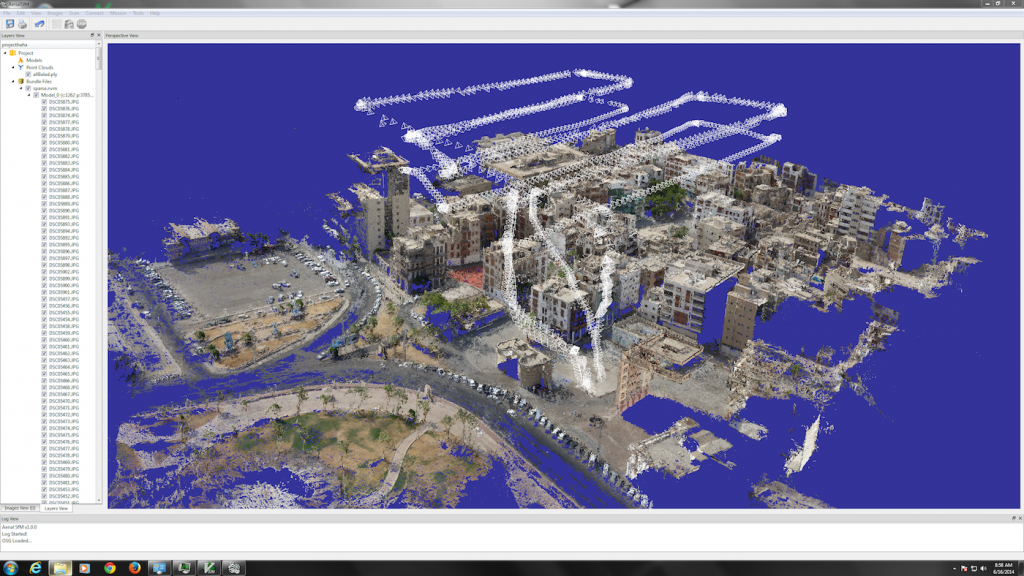 “Autodesk tools like ReCap, Revit and 3ds Max provide us with accurate drawings of sections, elevations, and structures of buildings,” explains El-Gawad. When combined with Building Information Modeling (BIM) tools and processes, he adds, it gives them unique and previously unavailable capabilities. “We can use these models to run various stress tests and simulations, like fire safety. We can plan for emergency response teams, evacuation routes, and many other scenarios due to the high accuracy of the models.”

The team at Falconviz can make use of the highly accurate point cloud to take measurements and accurately extract a CAD solid model of the building. Since all measurements are accurate to 1cm, final as-built plans can be generated for any of the modelled buildings from the original Structure from Motion (SfM) scan. 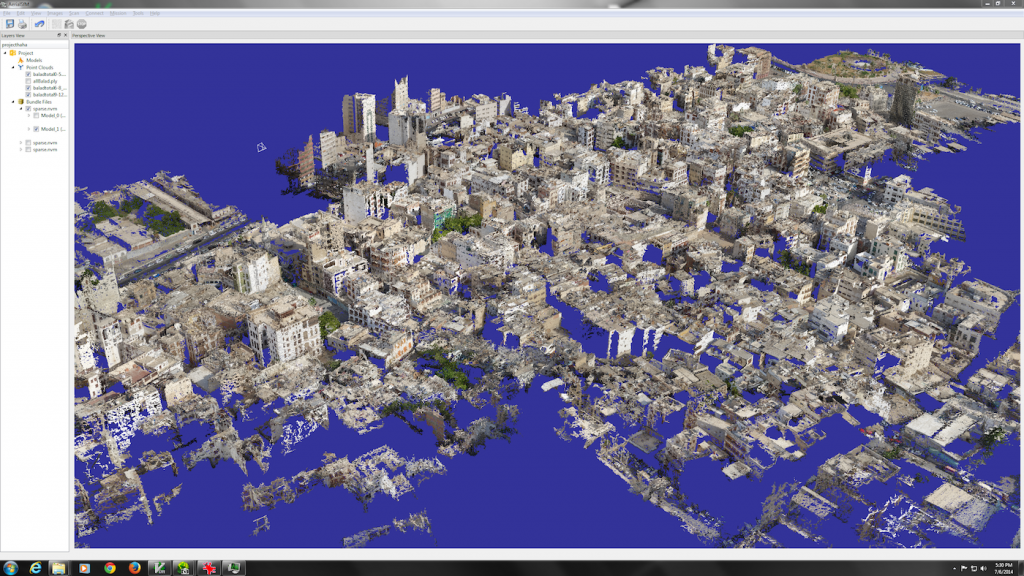 “Thanks to drone technology and the capabilities of Autodesk software, we can now do in a day what it would take a number of teams at least a month to complete.”

“Thanks to drone technology and the capabilities of Autodesk software, we can now do in a day what it would take a number of teams at least a month to complete. This has a positive domino effect on costs, manpower and efficiency. It also gives the Saudi authorities in charge of restoring and maintaining the Al-Balad area a comprehensive model to refer to when necessary. For example, there was a fire that destroyed few very old buildings some months ago. Without the accurate models we helped construct, these buildings would be lost forever. Now, they can still be restored,” adds El-Gawad.

This video from Falconviz illustrates the scanning process:

Documenting the past for the future

Falconviz is focused in its mission to “digitally document the world”. “We provide the technology that will help countries to improve and accelerate the process of documenting its most valued cultural assets,” says El-Gawad. “This project was one of our first, and one of the first in Saudi Arabia, and we are very proud to be a part of this renewed effort to carefully restore these cultural treasures that are an intangible part of human culture and history.”

Preserving these past icons for future generations is a beautiful thought, not without a touch of irony, especially when the same technology that is used in modern urban infrastructure planning and construction is helping save these ancient structures and restore them to their former glory.