In 2021, in parallel with the restoration of Notre-Dame de Paris cathedral, City of Paris launched a design competition to reimagine the urban landscape surrounding the cathedral. Four international multidisciplinary teams led by architects, urban planners, and landscape architects were invited to submit their design proposals. The project site includes the forecourt of the cathedral and its underground spaces and areas over the banks of the Seine River.

Today, City of Paris announced that the team led by Bureau Bas Smets was chosen by the jury as the winner of this international competition. The announcement was made by the Mayor of Paris, Anne Hidalgo along with Emmanuel Grégoire, first deputy mayor of Paris. 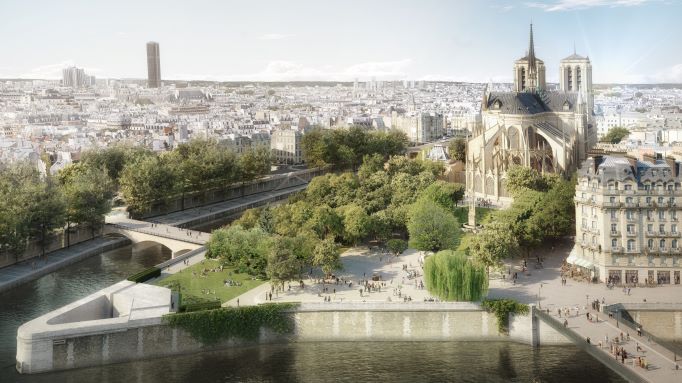 Autodesk, the technology partner of the competition, supported the City of Paris by providing technological expertise throughout the competition. Autodesk’s Building Information Modelling (BIM) solutions were used to create a 3D model of the existing area surrounding the Notre-Dame cathedral that competing teams used to understand the constraints of the site.

Autodesk worked closely with the four competing teams to help them create photorealistic visualizations of their design proposals. The digital documents associated with the competition, as well as the models produced, were also available to be used between the four teams, the City of Paris and Autodesk to collaborate in real time on the Autodesk Construction Cloud platform.

By visualizing the project in 3D, the City of Paris foresees a reduction in errors and greater clarity and collaboration with the winning team. All designs will be available for public viewing, helping to illustrate to Parisians the future development of the surroundings of Notre-Dame.

“The 3D visualization of the candidates’ projects, using Autodesk technologies, enabled the jury to immerse themselves in the proposals for the redevelopment of this historic district of Paris, and choose the best design. We hope millions of visitors will enjoy this exceptional site once construction is completed” said Emmanuel Grégoire, first deputy mayor of Paris.

Speaking on their winning design Charlotte Fagart, landscape architect at Bureau Bas Smets said: “The project rethinks the emblematic public spaces around Notre Dame as an assemblage of climatic atmospheres. The various working sessions with the Autodesk team helped to confirm the project hypotheses initially tested in the plan and model. In addition, the model facilitated the jury’s understanding of the project by immersing them in different places and areas of the project.”

“Through this new project, Paris is reaffirming its commitment to digital transformation and is now positioning itself as one of the first “cities of the future” by placing digital technology at the heart of its strategy to accelerate urban modernization,” says Nicolas Mangon, VP AEC (Architecture, Engineering, Construction) Industry Strategy at Autodesk. “Autodesk is proud to once again partner with the City of Paris on their digital journey. During this competition to reimagine the surroundings of Notre-Dame cathedral, the use of an intelligent 3D model, immersive 3D visualization tools and the implementation of collaborative methodologies have considerably accelerated the jury’s decision-making process. These tools will also allow Parisians and tourists alike to feel, experience and appreciate the richness of the history and heritage of Notre-Dame de Paris and its surroundings before the project’s completion.”

Now that the winning team has been unveiled, all four designs will be on display at the Pavillon de l’Arsenal in Paris. City of Paris aims to begin construction in 2024 and to complete it in 2028.