Bubbles instead of 1600 tons of concrete in German Building 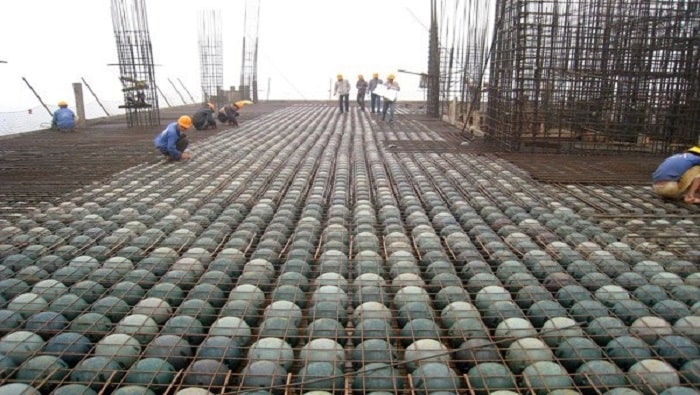 There is a new revolution currently taking place in Germany and hold yourself back it is not related to automobiles or digital space. A two-building commercial and residential setup in the Glückstein district of Mannheim, Germany has been the latest to cut weight and CO2 emissions by using the patented void former system which is made from recycled plastic availed from Heinze Cobiax Deutschland.

The difference between the two technologies is that the steel-reinforced plastic air bubbles replace up to 35% of the reinforced concrete required in slabs which results in the saving of materials and at the same time allows a shallower slab depth.

The fact is that void formers can go where regular concrete is not required. In the case of this building, around 60% of the slabs’ area could be filled with void formers without risking the design and construction of the structure. Due to this, the team involved in the construction of the structure could save 1613 tons of concrete and also prevented 136 tons of CO2 emission entering the atmosphere by the time shell of the 13 story tower was completed in July this year.

The developer and builder of the 24,300-sq-m scheme structure, Diringer & Scheidel Group (D&S) wanted to achieve Gold certification from Germany’s Green Building Council (DGNB). The structure will have a new office of insurance firm SV SparkassenVersicherung among others and also include 77 rented apartments. Also, due to the shallow depth of 30 cm, the tower met a maximum height restriction of 53m.

The engineers of the building were satisfied that the air-filled slab would work even though the scheme fell under a seismic zone. As per Walter Müller, executive structural engineer, the stable and even load transfer needed for this is attained using shear walls which are on top of 311 reinforced beam-columns cast on site. As Mannheim is located in a category 1 earthquake zone with subsoil class C & ground type class S, demonstrating seismic safety of the structure was equally important.

All thanks to the weight reduction provided by the bubbles, the beam-column length could be shortened from 8m to 7m.

All said and done, there was however a logistical challenge on the cramped site since it meant additional material had to be delivered. A total of 16 deliveries had to be in perfect sync with the slab pours.

According to Walter Varady, site manager for Diringer & Scheidel Bauunternehmung, the logistics planning have to be precise when we talk of  16,000 m³ of concrete and 3,000 tons of steel that needed to be delivered.

The construction of the structure started in November of 2017. The work on shell construction began in May 2018 and the handover of the project is scheduled for the summer of 2020.